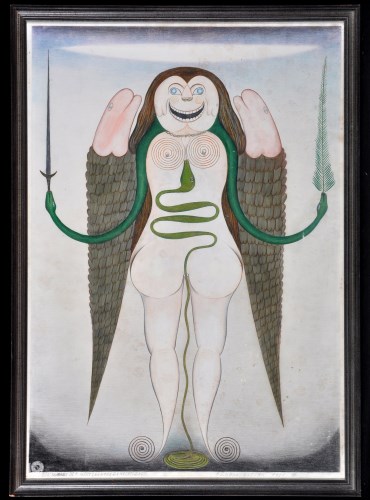 
Lot details
Friedrich Schröder Sonnenstern ''Die Waage der Hinternmondgerechtigkeit'' 1955 Signed, inscribed with title and dated Pencil and coloured pencils on paper 73 x 50.8cm See illustration Biography: Born Friedrich Schröder in Tilsit, East Prussia, Germany (now Kaliningrad Oblast, Russia). One of thirteen children, all of whom apart from one other died shortly after birth. He was remanded to a number of reform schools and then to an asylum due to suspected dementia praecox. Served in the army and worked in a circus before arriving in Berlin in 1919 where he occupied himself with occultism, divination and healing magnetism. Founded a Sect and distributed income in the form of bread to poor children. He created the name ''Sonnenstern'' (Sun Star) for himself whilst posing as a ''natural health'' doctor, alias ''Professor, Dr. Eliot Gnass von Sonnenstern''. Met the artist Hans Ralf in Schleswig-Holstein in 1933. After periods in prison and a labour camp during World War II began painting 1942. Exhibited at the Surrealist Exposition Paris, 1959, where he met Jean Dubuffet, who much admired his work. Descended into depression and alcoholism following the death of his long-time companion Martha Möller in 1964. Died Berlin 1982. Artist's Resale Rights may apply, please refer to our Terms & Conditions.