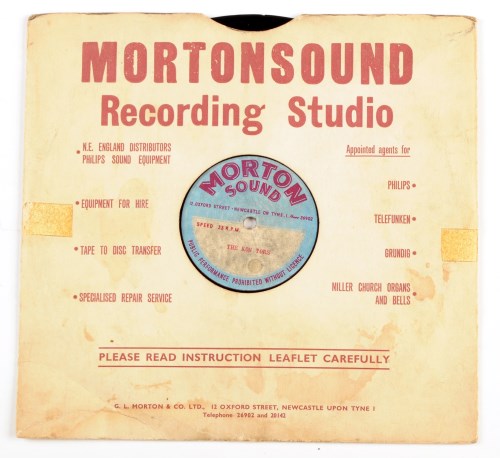 
Lot details
A rare acetate recording of the Kon Tors, recorded at Mortonsound Studios, Newcastle, in original sleeve. NB: The Kon Tors featuring Alan Price, Chas Chandler and John Steel, was the precursor to the influential R n B band The Animals. Keyboardist Alan Price, drummer John Steel and vocalist Eric Burdon, had all featured in an earlier band called the Kansas City Five. However, in early 1962 Alan Price left the band to join the Kon Tors, whilst Eric Burdon left to live briefly in London. The Kon Tors shortly became the Alan Price R n B Combo and then with the return to Newcastle of Eric Burdon and the addition of guitarist Hilton Valentine, became the Animals. This recording, which features six tracks ''Rain Until September''; ''How Cruel Love Can Be''; ''Twist Locomotion''; ''Breaking Up Is Hard To Do''; ''Point Of No Return'', and ''Love Letters, was unissued at the time, and it is thought that only six copies were given to band members.
Share this lot