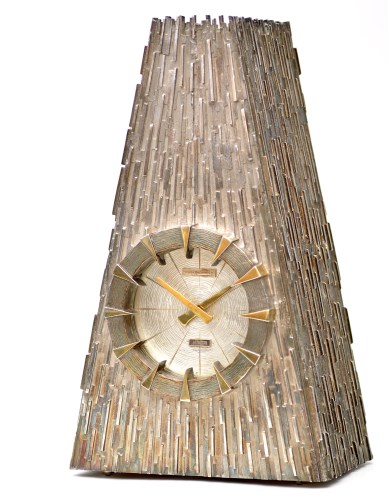 
Lot details
Christopher Nigel Lawrence for Jaeger LeCoultre: A fine and rare silver and silver gilt cased Atmos clock, bears hallmarks for London 1971, the case of rectangular tapering form, the front and side panels with a high relief abstract design, circular dial with outer bezel and dagger markers, 32cms (12 1/2in.) high. NB This Lawrence design was one of five designs specially commissioned by Jaeger LeCoultre. Lawrence was born in Cumberland, but the family later moved to Essex. At 15 he was an apprentice to C.J. Vander as a tray maker and flat hammer man. He then went on to Study at the Central School of Arts & Crafts, London. When he was 21, he moved to R.E. Stone, where he worked for two years with many fine craftsmen. He later spent eight years as Gerald Benney's workshop manager before setting up by himself in a small garden workshop in the late 1960's. Four months later he opened his own design studio and workshop in Leigh-on-Sea. Following a recession in the early 1970's, he closed the workshop and spent more time designing and making himself. He then moved to Southend and again had a workshop in his garden. He went on to win twenty-eight prizes in the Goldsmith's Craft Council competitions and three Jacques Cartier Memorial Awards. In 1973 he held a one-man exhibition at Goldsmith's Hall. During the 1970's he also did some design work for his old employer C.J. Vander. Furthermore, in the mid 1970's he produced some limited edition pieces for Jean Renet, 1 Old Bond Street, London, following a one-man exhibition in 1970.
Share this lot