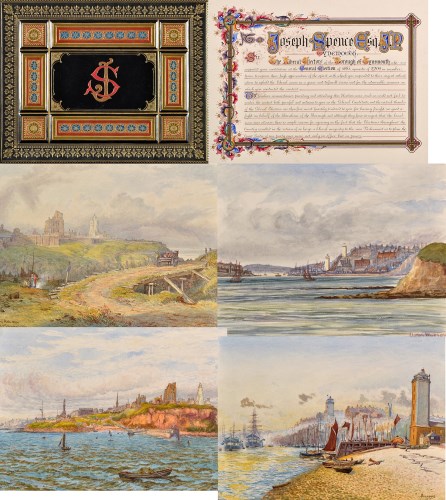 
Lot details
Henry Hetherington Emmerson, Charles James Spence, John Chambers, Aaron Watson and Robert Jobling (19th Century) ''TYNEMOUTH'', ''ST. MARY'S ISLE'', ''THE COLLINGWOOD MONUMENT'', ''SHIELDS HARBOUR'', ''TYNEMOUTH CASTLE'', ''SHIELDS HARBOUR'' AND ''SHIELDS'' signed, some inscribed and some dated a presentation album containing seven watercolour landscapes with calligraphic introductory pages; bound in richly-decorated and hand tooled leather covers and red moiré silk interior. Presented to Joseph Spence Esq., JP of Tynemouth, by the Liberal Electors of the Borough on the occasion of the General Election of 1885 34 x 44cms; 13 1/4 x 17 1/4in. NB Joseph Spence (1819-1889) was a respected Tynemouth businessman from a Yorkshire Quaker family and a partner with his brother Alderman J.F. Spence in a tailor and drapery business in North Shields. He had been treasurer of the Tynemouth Volunteer Life Brigade, a member of the town council, Alderman, member of the River Tyne Commission and the Tynemouth School Board. He was reluctantly persuaded by local Liberals to stand against the existing member of Parliament Thomas Eustace Smith (1831-1903) who was involved in a divorce scandal. His candidacy under threat in the run up to the 1885 General Election, Eustace Smith tried to keep the support of his constituency party by attacking the local Liberal caucus. The local Liberal Party was split over such questions as the troubles in the Middle East and in Ireland, and its caucus, led by Robert Spence Watson, was in open conflict with another camp, headed by the leading Newcastle MP and famous radical Joseph Cowan. Joseph Spence found himself under furious attack from his own party as well as his Conservative opponents. Joseph Cowan used his newspaper, The Newcastle Chronicle, to attack both Joseph Spence and the Liberal caucus. Victorian propriety prevented the mention of the Smith family scandal, and Joseph Cowan gave out that Eustace Smith had been forced to resign under unjustified pressure from the Liberal caucus. R.S. Donkin, Conservative candidate for Tynemouth, poked fun at Spence in his electioneering speeches. He made great play of Liberal divisions between Cowanites and the caucus, and he ridiculed Spence calling him a puppet of the caucus - his ''wirepullers''. Nationally the election was a great victory for the Liberals. But in Tynemouth poor Joseph Spence managed to turn a safe Liberal seat into a dramatic conservative gain. The strain of the campaign broke Spence's health and shortened his life. He retired from public life only retaining treasurership of the Tynemouth Volunteer Life Brigade until his death four years later. PROVENANCE Purchased at Anderson & Garland Fine Art Auction 13th August, 1991 (Lot 178). See illustration