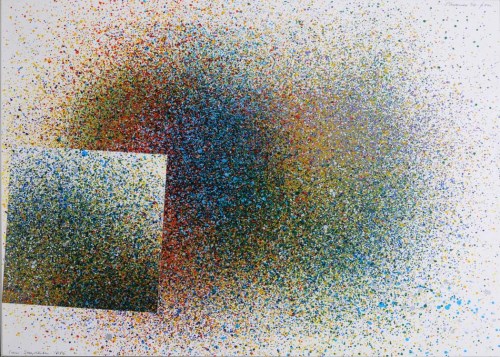 
Lot details
Ian Stephenson (1934-2000) FROM ''PHOENIX'' all signed, inscribed with title, dated 1980 and numbered 4, 94, 184, 274, 364 and 454 respectively from a total edition of 540 colour screenprint collages, printed by Medara Screenprinting and published by Editions Alecto for the Contemporary Art Society in an edition of 90 sets of six 56 x 71.3cms; 22 x 28 1/4in., in fully enclosing borderless plexiglass frames. (a suite of six) NB Each of the 540 ''Phoenix'' prints is unique but they were arranged together in sets of six. The basic image has a rectangle about 1/7th of the size of the main sheet, collaged on. During the printing process there was a sequence of nine regulated shifts of angle through which the collage rectangle was moved. These sequences were determined by the movement of the rectangle around the edge of the image area starting from the left corner. From a position against the edge it tilts on one fixed corner until another corner or side touches the edge again; then it is tilted away from a new fixed corner, producing a regulated tumbling around the inside edge of the image area. The concluded sequence, through nine fixed points, ends with the rectangle back in the starting position. The prints were numbered from 1 to 540 from start to finish of the sequence and the sets of six were made up by taking one from each run of ninety figures, i.e. the first set had the numbers 1, 91, 181, 271, 361 and 451 and the last set numbers 90, 180, 270, 360, 450 and 540. See illustration
Share this lot