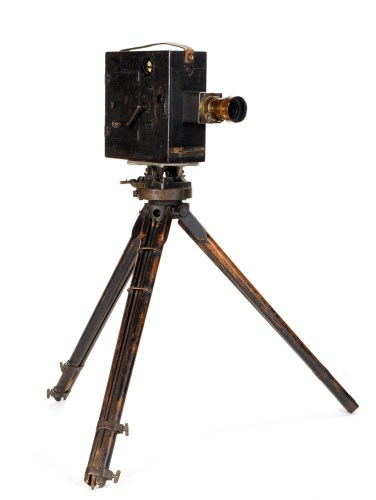 
Lot details
An English early 20th Century hand-cranked 35mm motion-picture camera owned and used extensively by the distinguished pioneer, natural history writer, photographer and cinematographer Cherry Kearton (1871-1940); the black-stained wooden body 29.5 x 30.5 x 13.5cms bearing the label of The Charles Urban Trading Company London & Paris; fitted a J.H. Dallmeyer brass-barrelled lens, with rack-and-pinion focusing and drop-in aperture slot; on heavy black-stained wooden tripod, with extending legs, the brass-mounted camera-mounting fitted pinion wheel adjustments. NB Cherry Kearton was born in the Yorkshire village of Thwaite and became one of the World's earliest and most influential wildlife photographers and writers. In the summer of 1896 he and his brother Richard (1862-1928) reached the remote island of St. Kilda and other formerly undocumented locations to produce their book ''With Nature and a Camera'', published by Cassell in 1899. With the advent of moving pictures Kearton moved into documentary film making, directing ''A Primitive Man's Career to Civilization'' (1911) and ''Roosevelt in Africa'' (1910). After initial success, Cherry began to narrate and star in his own movies ''With Cherry Kearton in the Jungle'' (1926) and ''Dassan'' (1930). Travelling over five continents, he was an early conservationist and Sir David Attenborough has cited him as a major personal influence. Provenance by descent. See illustration
Share this lot