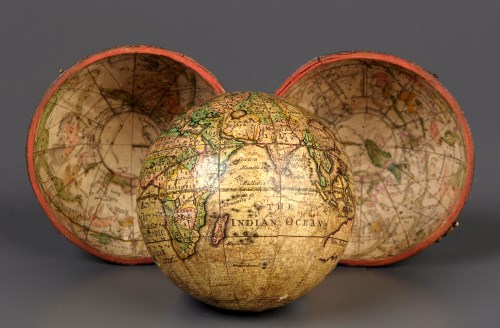 
Lot details
A mid 18th Century pocket globe, circa 1750, by John Senex, London, made up of twelve hand-coloured terrestrial gores and two polar calottes, showing countries, trade routes, meridians, California as a peninsula, Australia and Tasmania as New Holland and New Zealand and titled 'A New & Correct Globe of the Earth by I. Senex F.R.S.', contained within original fish-skin covered wooden case, the interior lined with two sets of hand-coloured celestial gores and two calottes, decorated with signs of the Zodiac and other constellations, red painted interior rim, 3in. (8cms) diameter of case.
Share this lot