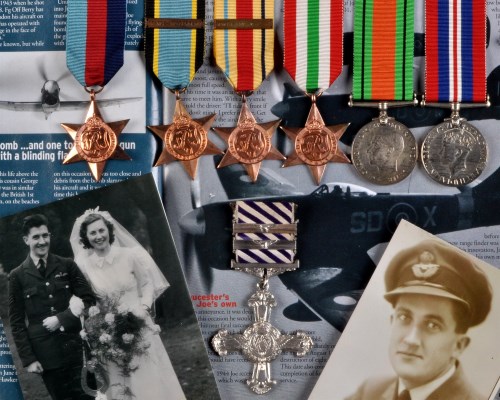 
Lot details
An important group of Second World War medals, awarded to Squadron Leader Joseph Berry, DFC** (118435) R.A.F.V.R., to include: Distinguished Flying Cross and double bar, War medal, War star, The Air Crew Europe star with France and Germany clasp, The Italy star, The Africa star with North Africa 1942-43 clasp and Defence medal, all with ribbons, DFC dated 1944 to medal and both bars; together with ephemera relating to the life and career of Joe Berry, including: a Gregory and Quilter parachute survivor lapel badge, inscribed to Berry, dated 12th April 1943 and no.129, with covering letter; a large amount of photographs from his childhood and time in the RAF, his wedding, Berry beside his aircraft and flying in Africa and Britain; many letters from friends, colleagues and well wishers on receiving the DFC and all his hard work and bravery in destroying the doodlebugs (V1s); letters and paperwork relating to his death, post pay and War Graves Commission material; copies of 'Doodlebug Champion', a short history of Berry written by Squadron Leader Howard Williams DFC (who flew with Berry); copies of enlistment certificate, disability certificate, gazetted certificates, many newspaper cuttings and magazine articles. History: Joseph Berry was born in Quarrington, Teesdale, Co. Durham, son of Arthur Joseph Berry and Mary Rebecca Berry (nee Charlton), 28th February 1920. The family moved to Stampeth, near Alnwick, Northumberland, where he attended the Duke's School. At the age of 16 he left school and moved to Carlton, Nottingham, where he worked as a clerk for the Inland Revenue. This is where he met his future wife, Joyce. He enlisted in the R.A.F. Volunteer Reserves in August 1940. On completion of his training he was posted to Squires Gate near Blackpool, with Squadron 256, where he was commissioned in March 1942 and married Joyce five days later. He flew Beaufighters in Southport, Kent and later Africa with 153 Squadron, carrying out convoy and night patrols, which was to prepare him well for the skills needed to destroy doodlebugs. The first half of 1943 he was posted to the defence of Algiers and Bone areas. Berry had his first victories during the Salerno invasion where he shot down three enemy aircraft, including two Messerschmitt Me210s (9th and 10th September), and a Junkers Ju 88 (24th October), after which he had to bail out of his aircraft. He was also involved in the 'Great E-Boat Raid' at Kos, Greece, where of the 60 aircraft involved, many Beaufighters were ditched due to high fuel consumption and only 25 safely returned. It was for these actions that he received the DFC in March 1944. In June 1944 he was promoted to Flight Lieutenant and posted with the Fighter Interception Unit flying Hawker Tempests, with a special order to destroy V1 Doodlebugs. Over the course of the next two months he soon distinguished himself from the rest of his colleagues by shooting down 52 and sharing one. This shared victory greatly annoyed Berry as the other aircraft was 1000 yards out to his 100 and by all accounts they were closer to hitting him than the V1 he had already crippled. Unfortunately he had sent it on a crash course with West Malling Airfield so he risked his life to destroy it entirely before it struck the buildings below. In doing so his aircraft was damaged but he managed to get home (an account from Joe Berry of this can be heard by clicking on the link below). His best score in one night was seven. He was moved in September to RAF Manston to lead and reform 501 Squadron, where he finished his tally of 61 1/2 V1's for which he received the first bar to his DFC. It is believed that he was put up for further awards for gallantry but due to the lack of information about his achievements they were not awarded. As the year moved on and more V1 factories were taken by allied forces his squadron of Tempests were sent into France to aid ground forces. On 2nd October he led two other Tempests flown by F/Lt E.L. Williams and F/Lt C.A. Hansen, to Northern Germany to destroy a rail yard thought to be organising the transport of V1s. On passing just east of Veendam, Holland, he was struck by ground fire and lost control, radioing his comrades ''I've had it chaps, you go on''. The aircraft crashed in Kibbelgaarn and he was buried in nearby Scheemda. He was awarded posthumously his second bar to his DFC on 20th January 1946 (back-dated 1944) for his efforts during the War. Provenance: Sold by instruction of a family member. Please click the link for a recording of Berry describing the technique of destroying doodlebugs, 8th September 1944. https://www.youtube.com/watch?v=jz1o_Bxscpg&feature=youtu.be
Share this lot