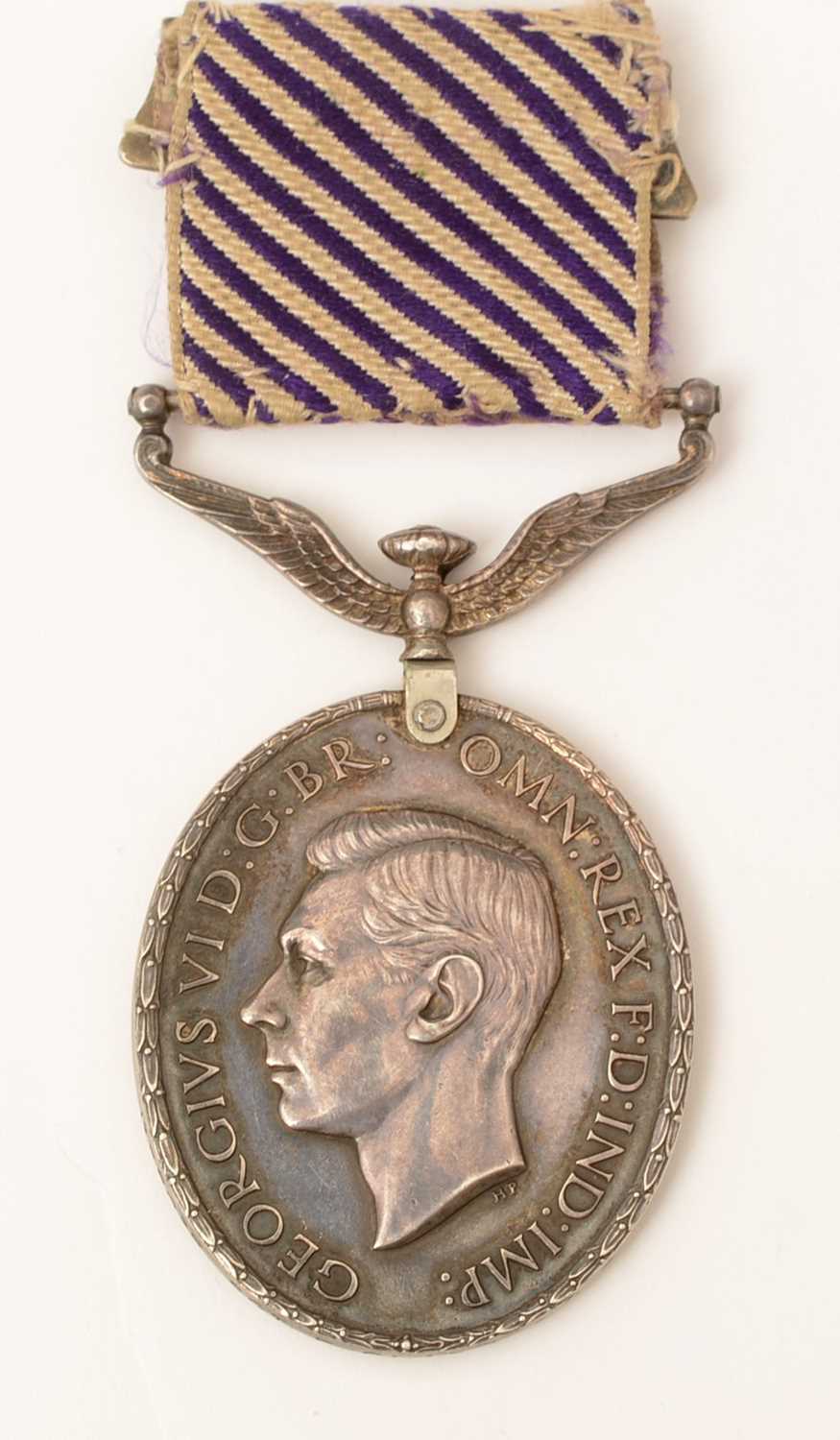 The recommendation from Air2/8944 is: "Sergeant Clark is a rear gunner of Stirling aircraft and acquitted himself with considerable courage and ability both as a gunner and, when the duty devolved on him, as fighter controller. He has shot down one enemy aircraft and probably destroyed a second. On at least two sorties, the directions given to the aircraft's Captain by Sergeant Clark resulted in such effective defensive tactics that the Stirling came safely to base from very hazardous combats. Sergeant Clark has now completed 22 operational sorties and has shown himself, both on the ground and in the air, a most keen and reliable gunner. He is strongly recommended for the non-immediate award of the DFM". No. 15 Sqn, 144 flying hours. London Gazette 20 April 1943.

Note: replacement clasp to medal mount.
----------------
The following report is a compilation made by RAF Intelligence from the statements made by all the members of the crew at their individual debriefings.

Our Aircraft was gently weaving; no cloud; good visibility and bright moonlight, moon to the SE
Rear-gunner (Sgt Clark) saw trace from unidentified enemy aircraft fired astern, and below from 800 yards approx. He fired back and informed Captain, who dived our aircraft, when E/A identified as M.E.110 appeared dead astern and level about 500 yards. Defensive tactics, diving turn to starboard, when E/A appeared on port quarter. Enemy fighter was firing cannon and machine guns and our aircraft was damaged. Our rear-gunner maintained a long burst as E/A broke away, diving to port. The enemy fighter’s port engine caught fire and the Engineer from Astrodome confirmed it as last seen diving to earth in flames.
CLAIMED AS “DESTROYED”

2nd attack. Meanwhile a second M.E.110 night fighter, first seen 500 yards away, came in from below and passed to starboard at 220 yards. Defensive tactics; Corkscrew.

The Mid-upper gunner (Sgt. Warren) engaged this aircraft and continued firing until the E/A passed behind main plane. Early in the attack two cannon shells pierced the Perspex of the mid-upper turret scattering Perspex over the gunner and cutting him. The ring sight was broken and the gunner seriously wounded with a lacerated cut over the right eye which injured an artery and bled profusely, another cut in the neck, whilst a piece of shrapnel knocked out a tooth and lodged in his gum. Nevertheless Sgt Warren continued firing and did not report his injuries until the combat was over. He then asked for someone to come into the turret as he could not see for blood from his head injury. Although Sgt Warren did not see the results of his attack the Engineer in the Astrodome saw his tracer strike the E/A and the E/A did not attack again/
THIS M.E.110 IS CLAIMED AS “DAMAGED”

The Air Bomber rendered first-aid to the wounded gunner who lay on the bed, and on landing, walked out of the aircraft before collapsing. He was later given a blood transfusion.

During the combat the pilot (F/Sgt McMonagle) carried out defensive tactics with control from the Engineer, the rear-gunner and the Mid-upper gunner. He was doing diving turns into the attack and “corkscrew”, and at the end of the combat had lost 3000 to 4000 feet.

Almost at the same time as the attack by the E/A accurate flak engaged and hit our aircraft, but there were no S/L. During this attack the rear turret was rendered partly U/S, the inter-com from the rear turret was rendered useless, and there were strikes on the fuselage. Having been damaged the bombs, 1980 x 4lb incendiary were jettisoned on or near to the target, and the Stirling turned for Base. The containers had presumably been hit by flak or fighters, as they were seen to be burning as they fell.

At 19:40 hours our aircraft was flying on a westerly course weaving at 4000 feet some 20 miles NE of Lingen when it had another encounter – an M.E.110 coming in from the port quarter and slightly below. Our aircraft dived and turned to port, when the E/A appeared above firing down on our aircraft. The rear-gunner, although his turret was damaged, managed to get in one long and a short burst and the E/A was also engaged by the W/Op (Sgt Noonan) who was in the mid-upper turret. Sgt Noonan had no ring sight, but aimed with his tracer, getting in several long bursts, hitting the E/A as did the rear gunner.

The pilot brought the aircraft back and landed safely at COLTISHALL.

Note: This is the second combat this crew has been engaged in within a few weeks. On each occasion gunners, captain and everyone else have worked together with coolness, first class discipline, good fighting control and good shooting.

Additional Details:
A total of eight Short Stirling bombers from No 15 Squadron, RAF, took part in this raid on Diepholz, Germany. One aircraft was lost. Stirling R9168/T captained by Pilot Officer F.S. Millen RCAF, was damaged by flak, and then was shot down by a night fighter at 20:09 hours. The aircraft crashed at Gortel, 7km SW of Epe. There was one survivor, an RAF Sgt who was captured and taken prisoner. One of the six crew members who died was 25 year old New Zealand air bomber Sgt Robert Hugh McKillop, RNZAF (NZ404389).

The target at Diepholz had been an aircraft park, where 200 to 300 German aircraft were stored in close proximity.

Click the 'View' button on the right to view highlights from this sale.