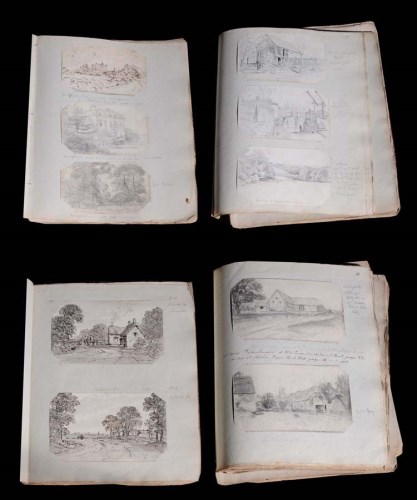 
Lot details
Dr. William Crotch (1775-1847) AN IMPORTANT COLLECTION OF EIGHT ALBUMS OF INDIVIDUALLY MOUNTED SKETCHES COMPRISING: Album One: Views on a journey from Oxford to Middleton Henry and back in 1799 and a journey from Oxford to Woodstock and Back in 1798. Album Two: Views of Oxford 1798-1802. Album Three: Designs for ''Mr. Newton's Picture'' based upon landscapes inspired by Claude, Wilson and Direct Observation 1801-1803. Album Four: Chiefly views of Oxford c.1803-1805. Album Five: View of Oxford, Ashbourne, Caernarvon, etc., 1803-1806. Album Six: Cappriccio landscapes and views in Oxford, etc., including examples attributed to the Artist's friend and fellow artist William Delamotte. Album Seven: Miscellaneous architectural and figural studies described by the artist as ''Non Descript''. Album Eight: Views of Markfield at Stamford Hill, other architectural studies and pastoral landscapes, 1806-1807. All extensively annotated with manuscript contents-pages mainly pencil with some ink-and-wash studies contained in quarter calf marbled boards. PROVENANCE Both of the above lots have remained in family care passing by descent via Sir Patrick Brown of Thriplow Bury, Cambridgeshire, to the present owner, another descendant of Catharine Sharp.
Share this lot