This week we hosted our September Country House & Fine Interiors Auction, and Fine Jewellery, Watches & Silver Auction. Both sales were a great success, with bidders from across the world battling against each other to acquire the outstanding, high-quality lots on offer. We welcomed thousands of bidders, both in person and online, which gave the sale day atmosphere a fantastic energy and buzz.

Top selling lots included a rare early 18th-century walnut bachelors’ chest which, after a furious bidding battle between UK and the US bidders, sold for £13,000 over the phone, to a buyer from the Home Counties. Other highlights included, a stunning late 19th-century Secessionist cherrywood occasional table, attracting an exceptionally high volume of interest, selling to a French buyer for £8,500; an eye-catching painting of a World war I anti-aircraft battery by the Ministry of Munitions and Sunderland born artist Septimus Edwin Scott fetched £7600 from a London buyer; and a lady’s 18ct. yellow gold Rolex sold to a local buyer for £5100.

In addition to the individual lots, the auction included the first part of Hexham man, Jim Hedley’s lifetime collection of specialist books, manuscripts, and pamphlets which smashed it’s pre-sale estimate, selling for over £30,000, which bodes well for the remaining books being sold in later sales. 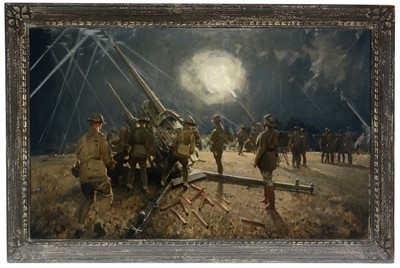