Here’s an overview of some of the most prominent North East artists and results from our recent auctions:

Norman Cornish was a well-known painter of the North East’s mining communities.

He worked as a miner from the age of 14 until he became an artist full-time at the age of 47 when his painting career was thriving.  Cornish’s watercolours, pastel and pencil drawings, oil paintings and other mediums feature images of the North East’s pit roads, collieries and miners, as well as street scenes, pubs, social clubs, personalities and portraits. 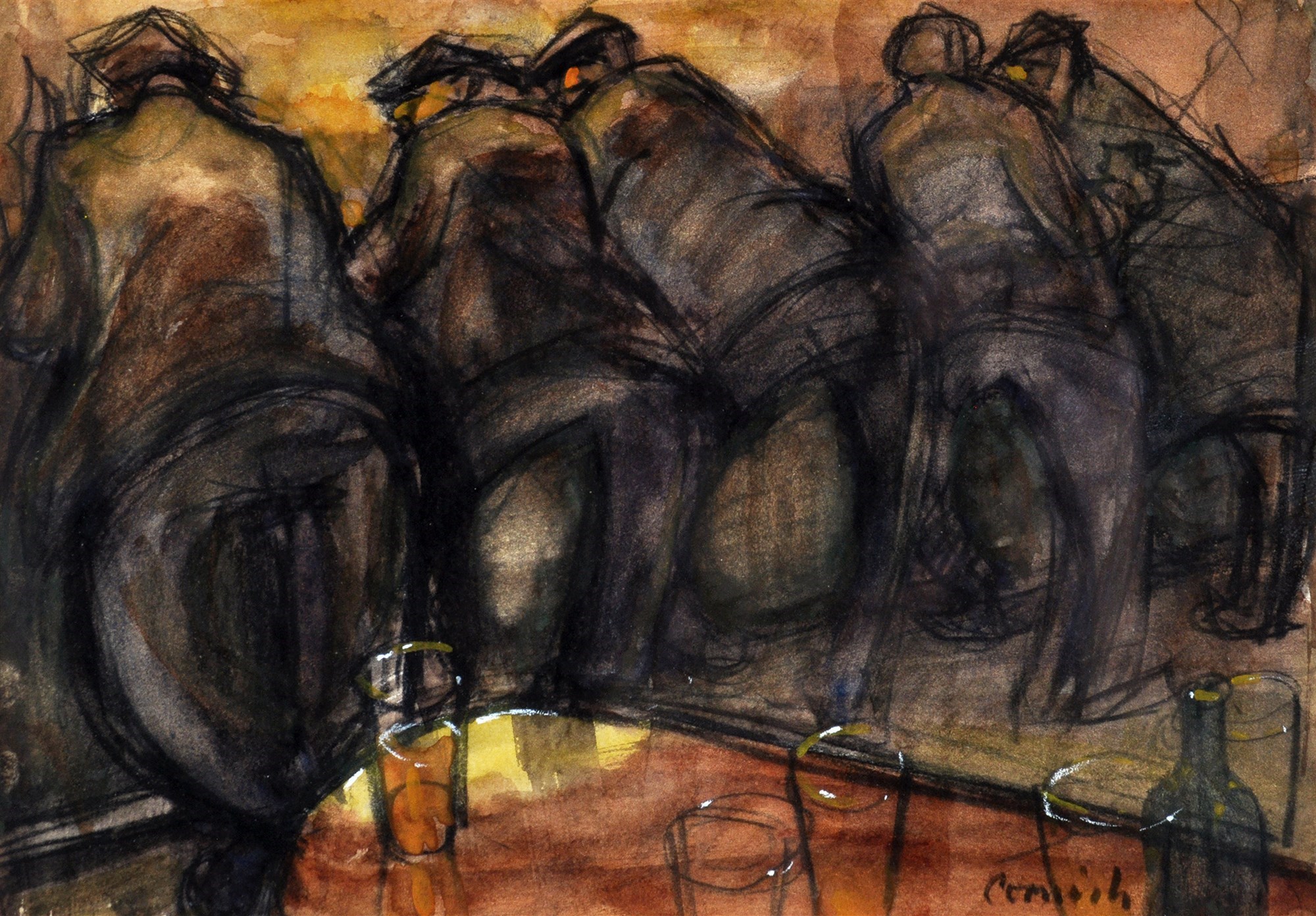 A common style from Cornish - ''Bar Ballet'', signed, with inscription on a gallery label verso, watercolour over pencil heightened with white. This sold for £5,500 in the Fine Art Auction.

The last surviving member of the Spennymoor Settlement’s ‘Pitman’s Academy’, Cornish was friends with well-known North East artist L S Lowry. He was granted an honorary Master of Arts degree by Newcastle University in 1974 and later in 2012 an honorary doctorate by Sunderland University.

You can browse through further auction archives of Norman Cornish here.

Robert Thompson has what could be described as a cheesy signature: he almost always carved a mouse into his handcrafted oak furniture! It’s rumoured that the mouse carving is related to the phrase "being as poor as a church mouse".

Robert 'Mouseman' Thompson: a turned and adzed fruit bowl, with carved mouse signature, sold for £400 in the Fine Art Auction.

From Kilkburn, in North Yorkshire, Thompson was part of the 1920s Arts and Crafts movement and contributed to the revival of craftsmanship in the UK. The Mouseman Visitor Centre is still open today, which includes a workshop, showroom and visitors’ centre.

Mouseman oak furniture includes everything from chopping boards, book ends, bowls, lamps, tables and wardrobes. You can identify true Mouseman furniture if the mouse features whiskeys and no front feet.

Can you spot the mouse?

View more of the Mouseman furniture sold at Anderson and Garland auctioneers here.

Painter, illustrator and woodcarver Ralph Hedley is well known for his portrayals of everyday life in the North East of England.

He moved to Newcastle from his birthplace of Gilling West in North Yorkshire around 1850, and he became apprentice to woodcarver Thomas Tweedy. He studied art and design and eventually set up a woodcarving business alongside his artistic endeavours. Over 50 of his paintings were accepted by the Royal Academy.

His work can be seen in many North Eastern churches including in St Andrew's Church and The Cathedral Church of St Nicholas in Newcastle.

Born in Newcastle, Robert Jobling was a former shipyard worker who started exhibiting his paintings at the age of 25. He was well-known for his watercolours and oil painting of the fishing communities, lifeboats and marine landscapes of Cullercoats and Whitley Bay, where he resided during the height of the Cullercoats’ colony of artists.

Jobling studied at the Newcastle School of Art and later became president of the Bewick Club in Newcastle.

His work was exhibited at important local exhibitions including the exhibition of local painters at the Central Exchange Art Gallery and the first exhibition at the Arts Association. His work was featured at the Royal Academy and the Suffolk St Gallery, among many others.

See his work that has sold at auction here.

Thomas Miles Richardson, snr., HRSA (1784-1848) ''FISH BOATS AT NEWCASTLE QUAY"  signed, inscribed with title and Artist's address ''4 Brunswick Place, Newcastle on Tyne''; with title ''Quayside Newcastle with fishing boats and old houses 1823'' on a plaque on the frame oil on canvas – sold for £18,000 in the Fine Art auction.

In 1818, Richardson became a contributor to London exhibitions and exhibited at the Royal Academy. Six of his sons followed in his footsteps, with Thomas Miles Richard Jr. first exhibiting at the age of 14 and then moving to London to continue his career.

Kenneth Rowntree ''LEVISHAM STILL LIFE'' initialled; gallery label verso oil on board – sold for £8,200 in the Contemporary and Modern Art and Design Auction.

Born in Scarborough, he attended the Ruskin School of Art, Oxford and later the Slade School of Fine Art. One of the Great Bardfield Artists, he studied alongside Eric Ravilious and Edward Bawden and later became Professor of Fine Art at Newcastle University.

View more of his work sold at auction here.

Thomas Bewick was a natural history author and wood engraver whose work pioneered a technical innovation of printing illustrations. Most recognised for A History of British Birds, his field guides and illustrations used in Aesop’s Fables made him one of the most prominent North East artists and illustrators of his time.

Further work included illustrating children’s books, engraving cutlery and making wood blocks for advertisements. His legacy includes the Thomas Bewick Primary School in West Denton, named after him, as well as street names throughout Newcastle and plaques marking his former workshops and homes.

William Kay Blacklock was a painter in both watercolours and oils from Bishopwearmouth in Sunderland. His realist paintings of the North East and country life are still widely popular today.

Blacklock studied at the Edinburgh School of Art and the Royal College of Art in London.

Interested in buying or selling North East interest art at auction? Browse through our auction archives to discover past sale prices or submit an online valuation form for a free pre-sale auction valuation of your art.