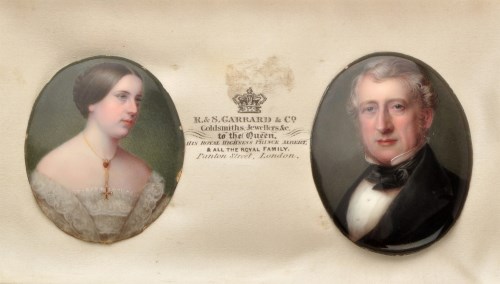 
Lot details
Garrard & Co. Ltd. interest: a pair of painted enamel miniature portraits on gold, of Sebastian & Harriet Garrard, painted by John Simpson, July 1851 and 1852, in original fitted brown leather case; a volume of Garrard, The Crown Jewellers for 150 Years, by Charlotte Gere and John Culme with William Summers, quartet books, signed by William Summers and dated November 1993; two copies of The History of Garrard, by William Summers; one volume of Royal Goldsmiths: The Garrard Heritage, privately printed 1991; eight Garrard annual catalogues; two card boxes; one Garrard Retailer's bag; and a framed rubbing taken from the tomb of Thomas & Alice Garrard, centred by family crest. NB Sebastian Garrard (1798-1870), was the youngest son of Robert Garrard, who took control of the company in 1802, and took over with the partnership of his two brothers, Robert and James. Images of the plaque are illustrated in Garrard for 150 Years p.18, Royal Goldsmiths p.29 with letter from W.H. Summers to Mrs. Garrard Kent, and The History of Garrard p.9. PROVENANCE Sold by direction of a Garrard Family descendant.