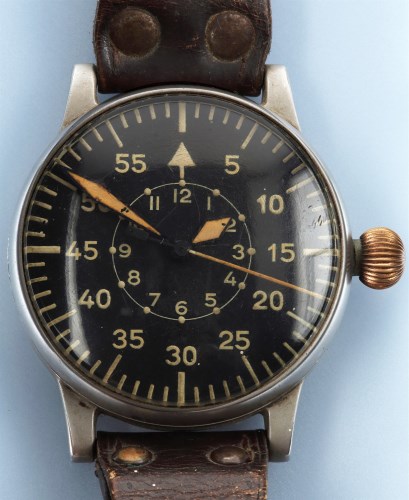 
Lot details
A rare giant-size Second World War German Luftwaffe B. Uhr aviators wristwatch, signed A. Lange & Sohne, with black arabic dial, manual wind, movement, signed A. Lange & Sohne and no. 215572, the outer case no. FL23883, nickel, silver, alloy case, the inner cover marked Beobachtengsuhr Bauart nhK/Gerat Nr 127-560A-1/WerK-Nr 215572/Anfordz FL23883. NB These watches were worn over the arm of the flying suit and were also equipped with large crowns in order to be used with gloves. Stamped on the side of the case is FL23883. FL stood for Fliegnummer (Flying Number) and '23' meant a device for flight monitoring. The final 883 digits were actually assigned by the German Testing Office of Aeronautics, the DVL (Deutsche Versuchsanstalt F3R Luftfahrt). They were given to observers for the flight, when the navigator would set their watch to the second, and had to be returned just after landing. See illustration