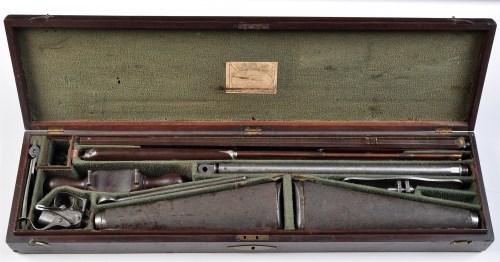 
Lot details
A rare 40 bore cased air rifle, complete with an additional 32 bore barrel for shot, by Samuel Henry Staudenmayer, No. 1084, c.1800, with browned twist octagonal sighted rifle barrel, 28 3/4in. long, case hardened breech signed in an oval gold lined recess just forward of an inlaid platinum line and numbered beneath, the shot barrel formed in three sections with matching breech, also numbered beneath, each fitted with figured walnut fore-end with engraved silver caps, signed numbered action finely engraved with border ornament throughout and a rococo garland on top a sunburst, the left-lockplate a trophy of arms with personification of wind in the left corner, on the right plate a sunburst with maker's name, fitted cocking lever, indicator and safety catch, the trigger guard also engraved a trophy of arms, two rayskin-covered signed steel butt reservoirs, each with internally threaded collar, brass-tipped wooden ramrods almost certainly the original; in original fitted mahogany case lined in green baize, the lid with trade label for 32 Cockspur Street on the inside and with brass carrying handle, complete with numbered accessories including bullet moult, pump and wrenches. NB Samuel Henry Staudenmayer, former workman of John Manton, was gun maker to the Prince of Wales and the Duke of York. He is the maker of the Girandoni-System air rifle in the Royal collection at Windsor (Inv. No. L409). Two air weapons by this maker are recorded in the Hanoverian Royal Gun Room, one of which was sold at Sotherbys Hanover, October 2005, Lot 868. PROVENANCE Thomas Del Mar, his sale Lot 534, 27th June 2012.