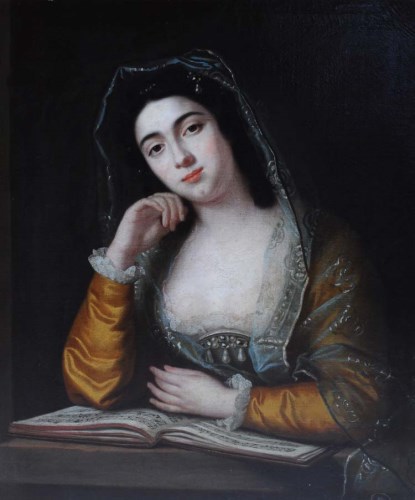 
Lot details
Manner of John Giles Eccardt (German 1720-1779) A PORTRAIT OF A YOUNG WOMAN, PROBABLY MARGARET, PEG, WOFFINGTON WITH A BOOK OF MUSIC OPEN BEFORE HER oil on canvas 74.5 x 62cms; 29 1/4 x 24 1/4in. ''Peg'' Woffington (18th October 1720-28th March 1760) was a well-known Dublin-born actress in Georgian London, who enjoyed much success at Drury Lane and elsewhere. She had numerous and notorious love affairs including a liaison with David Garrick. She was eulogised in a poetical sketch by Henry Jones and appeared in portraits by several artists of the day including Peter van Bleeck and Jacobus Lovelace. See illustration
Share this lot