Anderson & Garland can trace their origins back to 1840, and is today, the leading fine art auction house in the North of England and Scottish Borders.

An amalgamation between Newcastle's Anderson, Son & Hedley and Atkinson & Garland in 1913, gave birth to the present trading name, and for the following 75 years the firm was based at Anderson House, Market Street, Newcastle upon Tyne - the first purpose built auction rooms outside of London.

During the first 25 years of this period the firm developed invaluable experience as auctioneers of art treasures and furnishings at ancestral castles and large country houses in the area. Outstanding amongst these were Longridge Towers in 1920, Otterburn Hall in 1921, Swarland Hall in 1922, Creswell Hall in 1924, Callaly Castle in 1925, and Lambton Castle in 1932.

After World War II growth continued steadily. There were notable country house sales, some of these truly lavish affairs. Particularly of note was the auction at Eslington Park, Whittingham, Northumberland in 1951, which followed the death of the 7th Baron Ravensworth.

Then in the early 1970's came a sudden explosion of public interest in antiques. Collectors from all over the UK were attracted to the work of North Country artists and craftsmen. An increasing number of international treasures began to pass through the firm's salerooms, adding to those from the region that had accumulated here thanks to its wealthy industry and shipping in the 19th Century. Major house sales during the 1980's included Cardew Lodge at Dalton, Cumbria, Bradley Hall at Wylam and Slaley Hall, Northumberland. In the 1990's important sales were held at Acomb House and Elsdon Tower in Northumberland. More recent large country house contents sales include the contents of The Hermitage, Hexham, in June 2013 and, most recently in 2020, the principal contents of Whitchester Hall, Haltwhistle and Allensford Hall, Consett.

Due to increasing pressure on space, in 1988 Anderson & Garland moved for only the second time in it’s history to new 20,000 sq.ft. premises at Marlborough House, Newcastle. Here the firm was immediately able to take advantage of its vastly increased display and selling opportunities. The first day of the Inaugural Sale realised record figures for certain items and, up until recently, a record for a single days selling for the firm.

By 2005 a further move was required, with the intention of combining our two salerooms under one roof. Suitable premises at Westerhope, just off the A1 western bypass in Newcastle, were acquired and fitted out as auction rooms. The benefit of this new building was enormous useable space providing two 7,000 sq.ft. salerooms with a 4,000 sq.ft. warehouse, complete with racking system. From a customer's viewpoint, the new premises have plenty of free secure car parking and easy access to the A1 and A69. The airport is a short taxi ride and Newcastle Central Station is easily accessible by public transport. Being a new building, it is comfortable and spacious with full disabled access to all areas. The new Anderson House has all the modern facilities required in today's fast moving business environment.

Having embraced internet marketing and live bidding as we moved to the new premises, the firm's British clients have also been joined by those from Europe, the U.S.A., China, Australia and dozens of other countries across the world, allowing us to achieve the highest possible prices for items.
During the last decade at the new Anderson House we have sold many very special items and collections. Highlights include The Merrivale Stable, a work of art by iconic street artist Banksy which sold for £1,000,000. (inc fees); the Jacobson collection which included works by L.S.Lowry, Henry Moore and David Bomberg; The world record breaking Lalique vase which sold for £280,000; and the Heppe Collection of Outsider Art.

We are very proud of our history. Today, with over 180 years experience, we continue to offer the best service, by far, to solicitors, bankers, trustees, executors and private individuals. So, whether selling a single item, a collection or a whole house contents, it pays to choose Anderson & Garland. 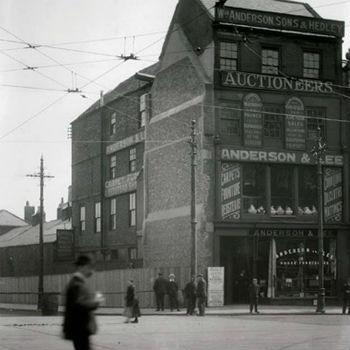 Still moving with the times!