75 years after D-Day: the story behind a North East journalist’s top-secret map

Captain Donald Leslie, a North East journalist and World War II Army Captain, played a momentous role in the events of D-Day! His top-secret D-Day map and other military affects were recently sold at auction in our Newcastle salesrooms. Here’s his story:

Originally from Tyneside, Donald Leslie moved to Embleton in Northumberland near where his grandmother ran the Beresford Arms. He was a journalist at the Journal newspaper and later went on to join the 50th (Northumbrian) Infantry Division where he became an army captain.

He self-taught himself German, which came in helpful while serving with the Control Commission in Berlin. Capt Leslie accidently wandered into the Russian Zone. He realised that he would be detained but was able to address two Soviet military policemen in fluent German. He managed to board a west-bound train before its doors slammed shut!

The captain was present at battles in both North Africa in Sicily before the fateful day of 6 June 1944.

Captain Don Leslie carried with him a top-secret map on D-Day. The map showed the invasion beaches of Juno, Sword and Gold. He also carried with him a Union Flag. These affects, alongside his medals, rank indenture, pay book and his photograph were auctioned off in our Newcastle auction house in April 2018. Initially valued between £200-£300, the lot sold for £600 in our Collector’s Sale. 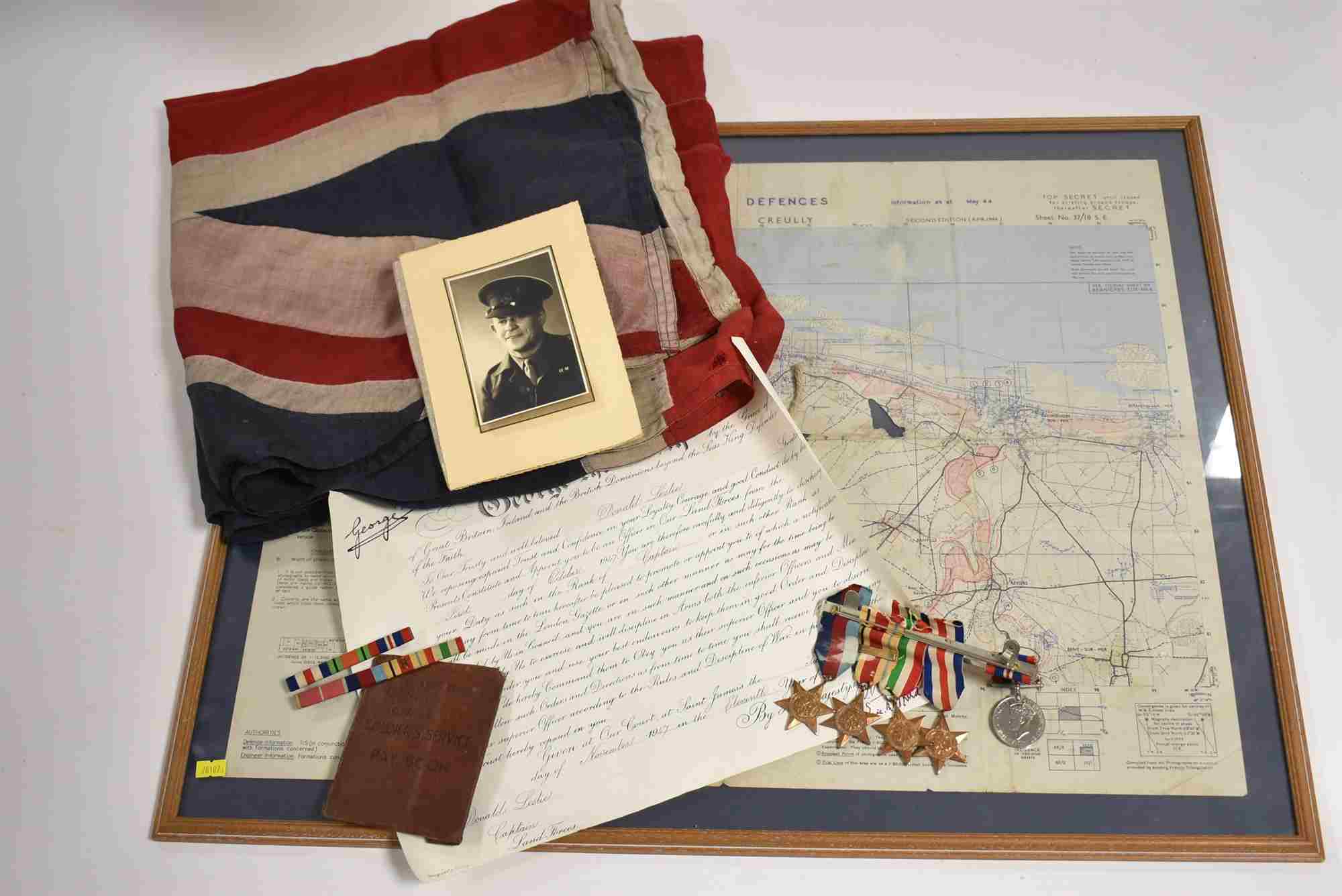 After the war he became Major Leslie and held senior PR posts at GHQ West Africa, HQ British Troops Berlin, HQ Anti-Aircraft Command, and Security Forces Cyprus at the height of the EOKA terrorist emergency. Later, he became head of Army public relations which also made him responsible for the Edinburgh Military Tattoo.

After his retirement, he moved to Dunstan in Northumberland.

As an honoured member of the Rotary Club of Alnwick, he participated in walks to raise funds for leukaemia research after losing his son to the disease. He passed away at the age of 90 while training for an upcoming walk. Don Leslie Memorial Walks have been organised in his memory to continue raising funds for leukaemia research. Over £2,000 has been raised in his name since he passed away.

“He collapsed and died on his training walk, within sight of Dunstanburgh Castle which formed the background to much of his full life,” said his granddaughter Tracy Coxon in an interview with The Chronicle.

“He was an amazing man who had a great sense of humour,” said Tracy.

“He was self-taught in German. He was an interpretator at the Nuremberg Trials, which was an achievement for someone from a small rural village.”

“I have decided to put these items up for sale as they have just been locked away for years and will continue to do so. I think they are best going to someone who has a passion for such things.

“I also have all his uniforms and I will be keeping his dress medals, and my older sister is keeping his MBE medal.”

View the lot and more details of his affects sold at auction.