How to identify: antique mourning jewellery

What is mourning jewellery?

Mourning jewellery comes in many styles but most notable were brooches, hair pins, tie pins, memorium rings and lockets.

Materials used are varied but a significant proportion of mourning jewellery during the Victorian perod is made of jet, because of its dark black colour. Jet is a fossilised coal mostly found near Whitby in the North East of England.

Cheaper alternatives on the auction market include black glass (known as French Jet) or enamel and vulcanite. Other common materials used in mourning jewellery are agate, ivory, pearl, garnet, gold or yellow metal, onyx and of course, human hair.

‘Hairwork’ in mourning jewellery is the use of woven human hair in the creation of the jewellery. Hair was also kept in mourning lockets.

The history of mourning jewellery

Queen Victoria made black jewellery fashionable after the death of Prince Albert in 1861. This is why it is widely associated with the Victorian Era, although mourning jewellery dates back to the 16th Century.

It became so popular, in fact, that England was reportedly importing around 50 tonnes of human hair per year during the middle of the 19th century to be used by jewellers to create mourning jewellery.

Early mourning jewellery could be described as more macabre and symbolised the concept of ‘memento mori’ which is a reminder that you will die. This style featured depictions of death itself: think skulls, coffins and grave diggers, while later mourning jewellery centred on the memory of individuals with inscriptions like ‘lost but never forgotten’ and imagery of angels or clouds, flowers like the ‘forget me not’ and later by the end of the 19th Century a bit more colour like turquoise being the colour of the forget me not.

As you can imagine, a large majority of pieces are easily identifiable by the inscriptions or by the hairwork used in the jewellery.  The materials are also often helpful in categorising it as mourning jewellery.

More valuable antique pieces will display obvious signs of wear or age but will be preserved in a good condition. A seasoned valuer will be able to determine an estimated age of the piece upon close inspection.

Watch out for sentimental jewellery. This also commonly contained a lock of hair, which typically belonged to a fiancée or husband, so determining whether it was in fact a mourning piece could be tricky. Sentimental jewellery also includes acrostic rings, wherein the stones initials spell out words. For example, “dearest” would read from left to right: diamond, emerald, amethyst, ruby, emerald, sapphire, and topaz, or “regard” being ruby, emerald, garnet, ruby again and diamond.

What is the value of mourning jewellery at auction?

As with all antiques, it depends on the age and condition of the jewellery, and of course it’s entirely based on the market to decide. Currently, items such as brooches and hair pins have fallen from popularity, but as with all fashions it will come back around. You could expect a high-quality piece or large collection of mourning jewellery to sell for between £200-£600 at auction and a selection of mourning jewellery could sell at auction for £50-£150. 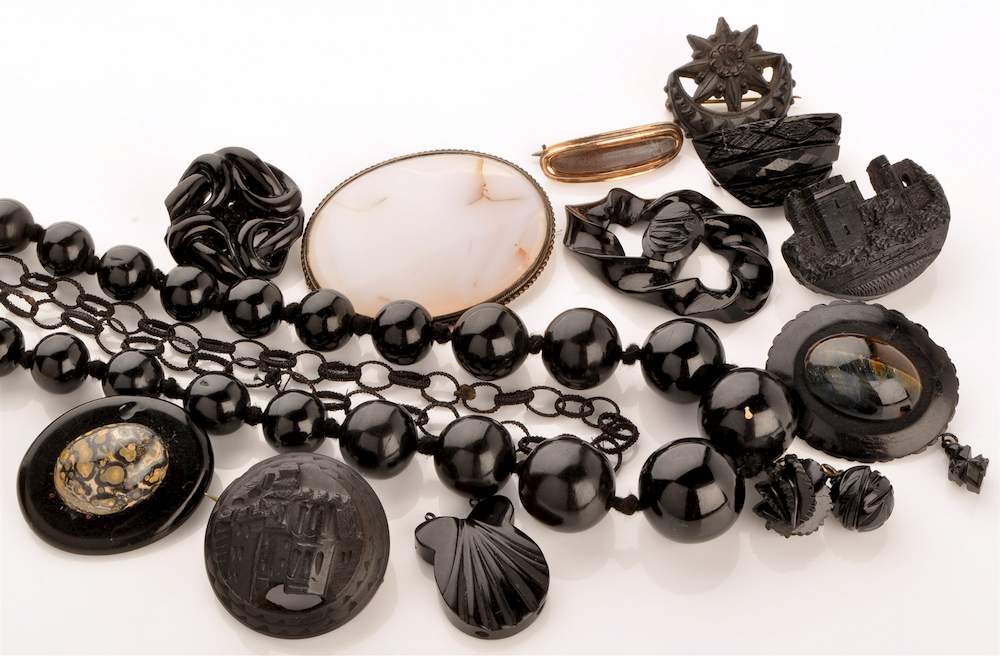 Interested in purchasing mourning jewellery? Set up Lot Alerts to be notified of upcoming pieces coming to auction. Alternatively, if you possess mourning jewellery and are curious to find out its value, contact us on 0191 430 3000 for a free pre-sale valuation or fill out our online valuation form.