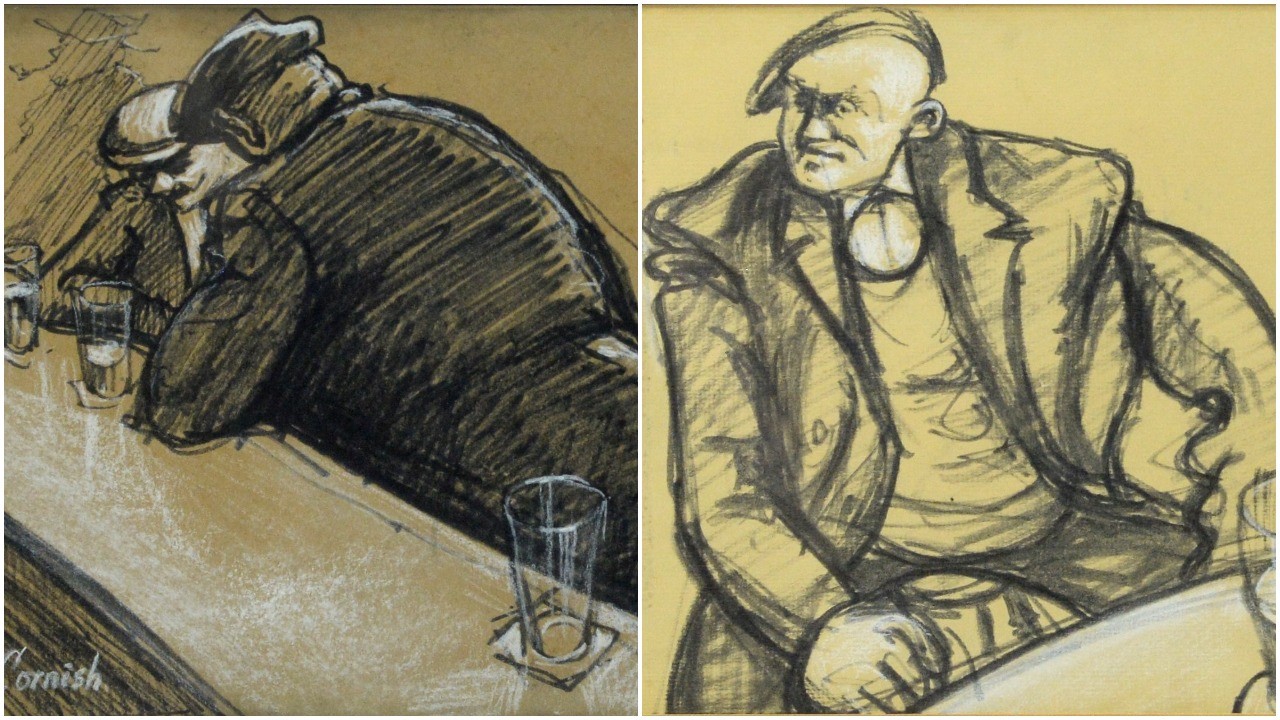 The friendship between a film star, a leading North East writer and one of the region’s best-known painters has come to light with the sale of two artworks.

Actress Sylvia Syms appeared in a long line of British films, including Ice Cold in Alex in 1958, opposite John Mills, Anthony Quayle and Harry Andrews and more recently, The Queen, alongside Helen Mirren

She is selling the works she owns by artist Norman Cornish, who she visited at his home in Spennymoor in County Durham on several occasions.

She was introduced to the artist by writer Sid Chaplin, who like Norman Cornish had worked as a miner in County Durham.

The sale at Anderson and Garland’s Newcastle auction rooms will take place on March 29-31.

Both artworks are in flowmaster pen heightened with white chalk. One shows two men at a bar counter and the other depicts a man drinking at a table. They are each estimated at £2,000-£3,000.

The background to the sale has been provided to Anderson and Garland by Sylvia Syms’s daughter, Beatie Edney.

She recounts how her actress mother had become an admirer of Norman Cornish’s work after seeing examples at Sid Chaplin’s house while she was appearing in a production at The People’s Theatre in Newcastle.

In 1946, Norman Cornish had held his first solo exhibition at the theatre.

After being introduced to Norman by Sid Chaplin, Sylvia visited the artist and his wife Sarah several times.

Norman Cornish’s daughter-in-law Dorothy Cornish, is also quoted as: “My husband John remembered his father recalling his great surprise and delight when a beautiful and famous actress walked into his home, looking to buy some of his work.

“Both Norman and his wife Sarah always spoke with great fondness of their meetings with Sylvia for many, many years following her visits.”

Sylvia Syms’s many film credits include Moonraker, Expresso Bongo with Cliff Richard, Victim with Dirk Bogarde, The Quare Fellow alongside Patrick McGoohan, The Punch and Judy Man (in which she played Tony Hancock’s wife), The Tamarind Seed with Julie Andrews and Omar Sharif and Anybody There? with Michael Caine.

Beatie Edney also has two books by Sid Chaplin. On Christmas Day in the Morning is dedicated by the author to her parents Alan Edney and Sylvia Syms, and a copy of The Leaping Lad is dedicated to Sylvia.